Coffee has been enjoyed for centuries, mainly for its rich taste and stimulant effect on the brain

Caffeine, the major ingredient in coffee, is the most widely consumed psychoactive substance in the world. However, there are studies, arguing that caffeine is not the only ingredient responsible for the effects of coffee on the body.  To date, a number of health benefits have been related to coffee. Some important effects are caused by increased levels of adrenaline, the fight or flight hormone, leading to increased energy and mental alertness.

elp the human body use insulin and regulate blood sugar levels while breaking down fat cells. Some studies have shown that coffee lowers the risk of death by 25% as well as reduces the risk of cancer, stroke, Parkinson’s disease and diabetes mellitus type 2. However, most of these studies are still under way. Some researchers believe that the studies which reported positive effects of coffee on the body are influenced by the coffee industry potentially causing biased conclusions and a direct conflict of interest.   In fact, some studies have demonstrated numerous and serious harmful effects of coffee including but not limited to insomnia, restlessness, heartburn, headache and anxiety.

Other studies suggest that coffee beans contain cafestol and kahweol

These are two ingredients that increase LDL, the bad cholesterol in our blood. Although filtering the coffee traps most of the LDL, cafestol and kahweol are still found in espresso, Turkish coffee, French press and Scandinavian style “cooked coffee’. 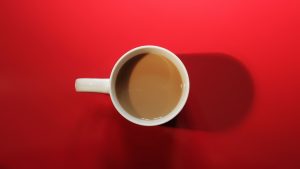 Over a long period of time, coffee has been shown to increase the number of gout attacks, breast cysts, urinary incontinence and increased menopausal symptoms such as hot flashes. Coffee consumption is also linked with a raised blood pressure and increased risk of heart attacks in adults. Finally, more than 4 cups of coffee intake is linked to early death.

In women,  caffeine may reduce fertility and increase rate of miscarriage

If you are pregnant,  you should consider limiting your intake of caffeine to 1 cup per day.  The American college of obstetricians and gynecologists advises women to reduce their caffeine intake in pregnancy to less than 200 milligrams per day. Debates continue over how much caffeine is safe in pregnancy and studies have yet to provide a concrete answer. When you drink coffee, caffeine crosses the placenta and reaches the baby via the women bloodstream. While a women’s body  can breakdown  caffeine relatively quickly, a baby’s body takes longer to remove caffeine from its system. As a result, babies are exposed to the effects of caffeine for longer periods of time.

The need to explore coffee alternatives has become more pressing as we learn about the increasing number of caffeine’s negative side effects. What can give us energy without harming our bodies? The good news is that there are more than 20 healthy alternatives to coffee and extensive research into these alternatives is underway.

All of these alternatives are instant energy boosters with less or no side effects.  In addition, stretching combined with eating a fresh apple can boost your system into similar caffeine wakefulness.

The withdrawal effects of caffeine are significant and become more distressing when we try to quit drinking coffee.  These include insomnia, restlessness, irritability and severe headaches.  While it is easier for young people to cut down on caffeine, withdrawal headaches are prevalent in 50% of all, this includes decaf.

As people’s awareness of their health increases, so does the need for healthier caffeine alternatives. Cutting down on caffeine can be very difficult for the first 4-5 days however with enough motivation and will power it is very possible and worthwhile.

Part 1 of a 3 part series: A simplified guide to buying your first house